Many areas in the world have tourmaline deposits including the United States, Russia, Afghanistan, Pakistan, Africa, and, most plentifully in Brazil.  In the early 1500s, a Portuguese explorer searching Brazil for emerald found an abundant deep green stone there.  For 300 years, people thought these were emeralds until modern mineralogists (around 1800) learned to isolate the chemical compositions of gemstones.  Alas, the green stones were tourmalines, not emeralds, although Brazil did have a large share of emeralds, too.  The term “tura mali” is from Sri Lanka (Ceylon) and it means “mixed stones or mixed colored stones” depending on which translation you use.   The Dutch used this term to describe the piles of colored rocks they found in riverbeds when exploring Sri Lanka.  I love the image of running barefoot over a random pile of river -polished tourmalines!

A COLOR FOR EVERY TASTE

The most entertaining thing about tourmaline is its range of colors. In general, hues and tones in gemstones come from the mineral elements (iron, chromium, copper, nickel, manganese and others) found within each crystal and tourmaline has the most color variety of any gemstone.   Tourmaline crystals grow in long, hexagonal rods that havemultiple colors abutting one another.  This explains the wonderful “watermelon” tourmaline that has red, white and green layered together. The rod-like crystal growth (think ‘cookie dough’) allows us to slice the material crosswise, yielding watermelon-patterned stones that are very popular. This tri-color effect is also found in faceted tourmaline.

The rarest color of tourmaline is a palette of bright blues and rich blue-greens. These stones are colored mostly by copper inclusions.   A relatively small find of this color was discovered in Paraiba, Brazil about 10 years ago. These stones have rocketed in price because of their beauty and rarity.  It is worth noting that a pocket of copper-bearing tourmaline crystals was found in Africa (remember that the two landmasses were once connected) and this find also produces gorgeous blues.

If tourmaline gets pressed or rubbed along its vertical axis, it creates an electric charge that can attract dust, paper, ash, and lint.  Some tourmaline crystals have a battery-like quality, with one of the crystals being negatively charged and one end positive.  At this writing, there are no known reliable commercial uses for tourmaline.  I know that it is used in some skin care products, but I do not think this adds any true functional benefit. 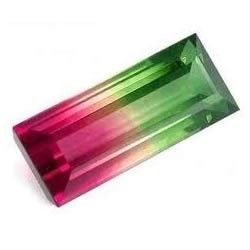