Reflections on the New Fabergé Exhibit

It’s an exciting time for Fabergé fans and scholars. “Fabergé in London: Romance to Revolution,” a new exhibit opening in November at the V&A Museum in London, will reunite a number of Fabergé pieces separated since the Russian Revolution of 1917. The exhibit marks the first time many of these eggs will be displayed together in the UK.

From 1885 to 1917, the House of Fabergé made these jeweled eggs for the Russian Tsars, who gave them to their families as Easter gifts. Each exquisite, painstakingly detailed egg opened to reveal a surprise: a functioning watch, perhaps, or a little elephant automaton that walked on its own, or an impossibly detailed miniature model of Alexander Palace. (And here I am, content just to get a piece of chocolate.) After the Russian Revolution overthrew the Tsars’ monarchy, the wealth of the Imperial family was confiscated. The eggs eventually dispersed around the world, sold off in the 1930s to fund an ailing Soviet economy.

The story of how they were scattered around the world and ultimately reunited is an interesting one, but even more fascinating are the techniques and innovations behind their creations.

Everyone knows the name Fabergé, but few people realize that Russian jeweler Carl Fabergé wasn’t the only one doing all the hard work of crafting these little treasures. It’s the same with many paintings by the famous Dutch Masters. Their paintings were not painted by the artists themselves but with the help of a team working in their studio.

Apprentices did the painstaking work of grinding and mixing paint and preparing palettes, and sometimes they assisted in the production of the paintings themselves. Studios even had painters who specialized in painting different types of clothes. The signature of a famous painter was more of a brand name or seal of approval than a signifier of authorship. “Rembrandt,” for instance, can be seen as a label, a style, a guarantee of a certain level of quality.

Experimentation and Collaboration in the Fabergé Workshop

This is also the case with Fabergé eggs, but with a scope befitting the industrialized era in which he worked. Fabergé assembled a dream team of the jewelry world: Russian portrait artists, Swiss watchmakers, and the finest goldsmiths, lapidaries, engravers, and jewelers in Europe.

While Fabergé’s unique works of art may have been the vision of one man, they represented the efforts of dozens of talented artisans, all masters of their crafts, working out of studios all located in the four-story Fabergé headquarters in St. Petersburg, Russia. He put his trust in these craftsmen and allowed them the freedom to express their own artistic visions through the vehicle of the precious eggs. In all, it could take up to two years to complete a single egg.

Fabergé sketched the designs and chose materials with an eye for their visual effect rather than for value alone, working with gold, platinum, jade, quartz, lapis lazuli, diamond, and other materials as each project required. He employed various alloys and developed over a hundred new colors of paint in order to fulfill a particular artistic vision.

If the techniques to realize this vision did not exist, Fabergé would ask his artists to invent them. Some of these techniques still cannot be replicated today. Other techniques that had been in use for centuries, such as the enameling technique cloisonné and the engraving technique guilloché, were furthered and perfected in his studios. Cloisonné, a predecessor of enameling in which plates are held in place by soldered strips of metal, has a long pedigree in Russia, having been used in works created for the Byzantine emperors since the 6th century. But Fabergé’s craftsmen were able to take the technique further. The specific processes of these artisans’ many innovations, however, are lost, possibly forever, as Fabergé buried the documents in an unknown location.

As with the Rembrandt example above, many trades in 19th century Russia (and in neighboring countries) were still governed by guilds, so there was a great deal of specialization and division of labor by necessity. These rules were not limitations for Fabergé, who turned to master goldsmiths or silversmiths when his vision called for gold or silver, to watchmakers when he wanted surprises to feature moving parts, and so on. Many of these master craftsmen left their mark on Fabergé designs—literally—in the form of initials stamped on the bottom of a piece.

These eggs are not only beautiful, irreplicable works of art but also testaments to what a supremely talented team can accomplish when they work together and trust one another’s capabilities. 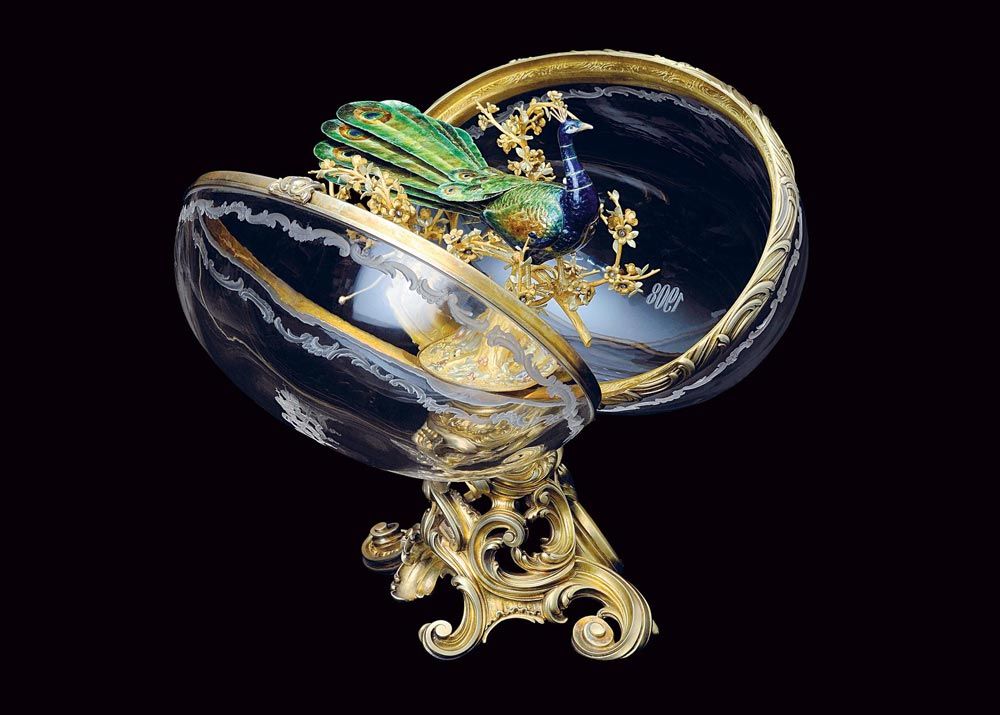